It's cold out there. And on February 20, our team is going to do something about it. Together with thousands of Canadians across the country, we're walking and fundraising to support and serve people and families experiencing homelessness, hurt, and hunger in our community.

We made the Local Paper in my Hometown.
[Local chapter of Star Trek fan association hosts food drive for The Table - Huntsville Doppler (doppleronline.ca)](https://doppleronline.ca/.../local-chapter-of-star-trek.../) 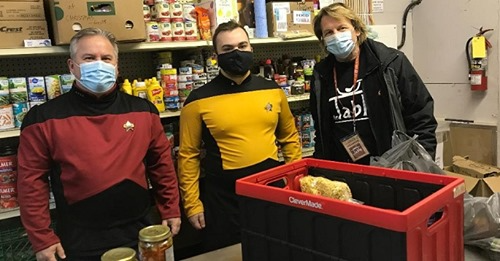 NOVEMBER 23rd, 2020 the NOMAD is going to be officially commissioned.  Going form an NX prefix to the NCC! 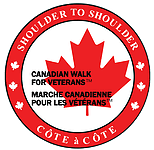 Calling all Star Trek fans! USS Nomad, a new chapter of Starfleet, the international Star Trek fan association, has formed in Huntsville and they want you to join.

The USS Nomad is named after the Star Trek ship and has 17 members across Ontario. Five of them are based in Huntsville.

The club, which formed in June, is one of 20 regional clubs around the world.

While the USS Nomad is only a few months old, people have been creating Star Trek-based clubs for more than 40 years.

The club’s goal is not only to have fun and chat all things Star Trek, but also to do charity work and fundraise for causes that are important to them.

“We want to make friends while also giving back to our community and fundraising locally as well,” said president Rob Ehl.

This past weekend the club hosted their first event, in collaboration with the legion, decked out in Star Trek-themed costumes.

The members who are based in Huntsville met at the legion and walked 5km in order to raise money for the third annual Canadian Walk For Veterans.

This year the Walk for Veterans is supporting the purchase of canine companions for veterans and first responders who have PTSD.

“With my background in law enforcement and having family and friends in the military I believe the dogs are often essential for some people’s survival,” said Ehl. “I have witnessed dogs calm people in stressful times and significantly helped their anxiety.”

Due to COVID-19, the new club will be interacting primarily over social media but will meet up when they are able to.

If you’d like more information on becoming a member of USS Nomad, email uss.nomad.command@gmail.com. As a member of the club you’ll be able to participate in courses and classes offered by the Starfleet Fan Association as well as local events. Learn more about Starfleet here

On September 26 and 27th, 2020 members of the Crew will be participating in the Canadian walk for Veterans.  This year's event due to circumstances will be a virtual event were you can run, walk, cycle or do any exercise to complete the  challenge.

To the Military veteran, First Responders, Civil Servants and every essential worker across the country, this walk is for you!

This year's proceeds are going to Courageous Companions.  An organizations who has the goal to provide top quality service dogs to veterans and first responders to help live full and meaningful lives.

Service dogs help person's who experience PTSD, OSI's and other traumatic events.  The cost to develop these dogs is immense and precludes some from having an dog.

The crew of the USS Nomad will be supporting this event by participation in Huntsville, Ontario and other communities.  In Huntsville, there will be members participating in Star Trek Cosplay while they walk.

Join us or offer your support to this great cause!